The Florida State Record for Cobia is 130 lb 1 oz, and was caught near Destin. No wonder Destin is the Cobia Capital of the World!  Imagine a fish of that size!  Cobia are some of the strongest fighting fish because of their beefy muscular make up and their innate tenacity.  The Cobia is a powerful fish and a thrilling catch and is one of the most sought after game fish and once hooked the thrill really begins with line coming off a screaming reel and the angler unable to do anything but hang on!  Cobia are considered an inshore/near shore species and sight fishing is the best method to find these tasty brawlers and works even better if your vessel is equipped with a tower or raised platform.  Cobia can be found in all waters off of the coast of Florida and down into the Keys.

The appearance of the fish in local waters is temperature driven and most Cobia anglers start watching the water around mid March for the fish to show up.  Cobia are generally found in near shore and inshore waters with inlets and bays – the fish like structure and are frequently found around buoys, pilings and wrecks in these areas.  Cobia spawn in spring and early summer and can be found throughout the summer months.  Experienced Cobia anglers will look for turtles, manta ray and floating debris to find Cobia- the fish enjoy the easy pickings from the rays as they dig up the bottom foraging for their own dinner.

Cobia are a versatile game fish caught on fly and spinning tackle both.  They can be found in offshore waters, near shore waters and on the flats. So no matter what your equipment, type of boat or level of experience there is A COBIA IN YOUR FUTURE!

The BEST TACTIC for hooking and catching Cobia it to BE PREPARED!  Cobia have a reputation for being extremely finicky when it comes to live baits and lures so have several rods baited and standing by with a variety of offerings.  Cobia frequently travel in at least pairs and sometimes threesomes – have several stout rods rigged and ready to go at the fish opportunity.  Live crabs and small fish are good bait for cobia but eels and live pinfish and a variety of artificial baits work well especially bucktail combinations with plastic tails. My favorite bait for cobia is an artificial eel made of surgical tubing with a lead sinker at the head.  Live baits for cobia include spot, menhaden, mullet, minnows, perch, eels, shrimp, crabs, and clams. These use of these live baits vary with season and location and only experience can tell you what to use and when. Keep bait near the surface or, if cobia are deeper, add just enough weight to get the bait down and still retain its movement. Medium to heavy tackle is generally a good idea to land these fish that average 30 pounds and as every true Cobia hunter knows can easily go over 60 pounds.  Fishing for cobia along pilings with a weighted eel is a favorite tactic of experienced anglers. 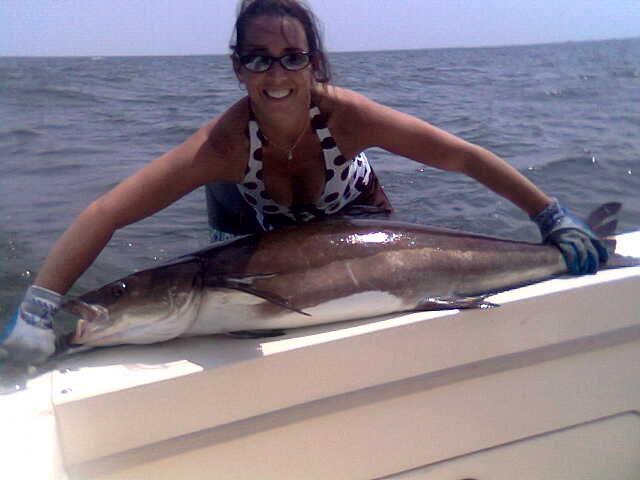 Cast the reel so it drops alongside the pilling and drops down- if you don’t get a strike the first time keep trying until you have covered all angles before moving on.

A word of caution, Cobia are a tough hard fighting fish and large specimens when gaffed and boated have caused anglers to lose equipment, be injured and have damaged boats.  Have a plan when you get that fish over the side- have a fish box open and ready and the decks cleared so you can easily in one coordinated move land the fish and move it to the fish box.

Cobia are excellent table fare and are also great raw for sushi or sashimi. It can also be used as a replacement for fish such as tuna, if people are looking for an environmentally sustainable alternative, as the texture and flavor are quite similar.   Did you know that Cobia grows three times as fast as salmon and has been commercially produced in Asia, particularly in Taiwan where it is stocked in about 80% of ocean cages.  Here are a few good Cobia recipes to try out- but nothing can beat a hot charcoal grill and a little Italian seasoning splashed on top!

Drain steaks and lay in a casserole dish coated with olive oil.

Squeeze lemon juice over steaks, coat with butter and sprinkle with seasoning.

Bake for 10 minutes or until fish is white on the outside and still slightly pink in the center.

1. Rinse fillets and allow to drain in a colander. If necessary, blot away excess water with a paper towel.

2. Mix the dry ingredients together in a bowl.

4. Bake at 375-degrees for approximately 15-20 minutes. The fish is cooked when it is white and flakes easily

In fishing, it is extremely important for anglers to know what types of fish there are in a certain location, like Florida. While tuna is one of the most abundant species in Florida, there is also another species of fish that thrives in the Florida waters just as much. These other species are known as bill fish.

Bill fish is a common term applied to large predatory fish that are known for typically being large in size with long sword-like bills. Some of the most popular bill fish that have been identified include sailfish and marlin. In addition, these species can be found in the migratory, pelagic, and all oceans.

In Florida, however, there are specific species that are found in abundance in its waters. Some of the bill fish found in Florida includes the following:

While there are other fishes that are also found in Florida, a number of anglers travel to Florida for a chance to catch bill fish since these fishes are sometimes deemed a bit aggressive and hard to capture making it more challenging for them. To catch a billfish is one of those memorable moments in an angler’s record that beats capturing the often common snappers.

Come explore a iOutdoor Fishing Adventure on your next visit to Florida setting kite on your favorite offshore species!