What are the best tasting fish in salt water?

Taste, of course, is a matter of personal preference. Something that tastes delicious to one person may not be tasty to another. Still, there are those that are thought delicious by most people. The following are some saltwater species that a lot of people think are the best tasting fish. 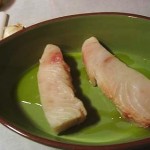 This fish is highly regarded by many gourmets. Its meat is white and delicate, delicious no matter how it is cooked.

Fondly called the “chicken of the sea”, this fish can be cooked in many ways. A lot of people consider this a favorite.

This is another favorite – can be raw wherein it is soft and juicy and can be cooked in several ways, such as fried or in soup, wherein the meat is flaky and delicious.

With a tail meat that tastes like lobster, this fish is considered the “poor man’s lobster”. Although the fish, itself, does not look appealing, its meat is so delicious that many people consider this a favorite.

Halibut has low fat content and is so delicious that it still tastes wonderful even with little seasoning. This fish is often broiled, grilled, or fried.

A common ingredient in “fish and chips”, the meat of this fish is moist and flaky. Its liver is also considered a delicacy.

This is among the most popular fish – raw, smoked, or cooked. Aside from having a delicious meat, this fish is also favored because of its high nutritional value.

Most of the tuna species have a delicious meat, high nutritional value, and delicious even when canned.

Mainly used in deep sea trolling, outriggers are a pair of long poles fitted on both sides of a boat that holds fishing lines away from the boat. It is usually made of fiberglass and aluminum, and is tilted at an angle between 70 to 80 degrees.

When being used, outriggers are lowered to an angle nearly the same level as the water’s surface. At the edge of each outrigger is a pulley with a cord, attached to which is a quick release clip that holds the fishing line. Once a fish strikes, the line is released so that it can be landed with the use of the traditional rod and reel.

Generally, outriggers improve the chances of a fish striking because not only does it allow the angler to cover more ocean space, it also permits the use of multiple lines. Because outriggers allow the use of multiple rods and reels, anglers can troll as many fishing lines as it may allow, thus, simulating a school of bait fish. It also allows the leader out of the water, thus, preventing bubbles that may scare the fish away.

Outriggers also hold the fishing lines at a distance from both sides of the boat, spreading the lines far enough to prevent the risk of tangling. With more lines in the water, the angler can set them at different distances and depths that can create a variety of natural patterns to increase the chances of a strike.

The shallow, rocky reefs are also home to many fish species, however, trolling in these grounds are dangerous. With the use of outriggers, the fishing boat can stay in the safe deeper water while the lures are positioned to graze the shallow waters. 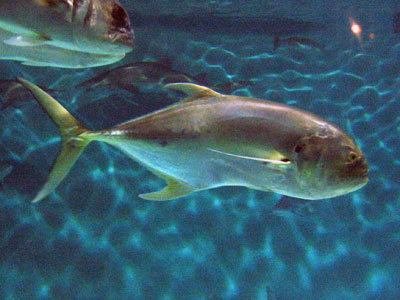 Jack fish or Jacks can be found in both inshore waters and the open sea. They tend to show up anywhere and everywhere but most of the time in places where there are lots of food or baitfish. Jacks often travel into fresh or brackish waters and are often seen in springs that lead to the ocean.

Jacks school by size, the largest fish forming the smallest schools. When they sight prey, often near the surface of the water, they perform remarkable slashing attacks and with such commotion that can be seen at a great distance. When they are done attacking and feeding, they regroup again for their next assault. Jacks are known to be a predatory species and are one of the most contentious bullies in the waters.

Their main food item is fish. A food study reveals that 80% of fish were found in their stomachs, 40% invertebrates, and 2% pieces of wood. They have great swimming endurance as evidenced by their red flesh and falcate tail fin. Jacks also tolerate a wide range of salinities.

One of the most memorable challenges anglers all over are bound to take is to tackle the Silver King or the tarpon in the waters of Florida. The Megalops atlanticus is commonly known by the name Tarpon. Anglers flock from different parts of the world to fish in Florida because it is here that many great numbers of Tarpon migrate to.

There is little known about the Tarpon because it has no food value compared to other fish. What is known about the Tarpon, however, is that these are prehistoric animals dating back as far as 100 million years. Tarpons also possess a unique organ called the swim bladder which enables them to breathe from the atmosphere. Tarpons, in their early stages of life, typically stay in shallower waters. However, once they grow to about two feet, they move to larger bodies of water. Tarpons are usually found in deep, man-made canals and holes far up the coastal rivers of Florida and in the upper reaches of large bays.

Never go out tarpon fishing unprepared and without any foreknowledge whatsoever. What are being caught are not little fishes but giant ones that can actually exhaust any novice fisherman. The key to successful tarpon fishing is to find northbound schools on the beach. This situation usually presents itself after the first full moon in June. Compared to southbound tarpons, northbound tarpons are hungry and are more likely to stop for bait.

After the right type of tarpon is found, proper presentation and good bait is all that is needed to make the catch. Anglers should distance themselves from their targeted tarpon from a 50-foot gap. With tarpon fishing, overcastting is always a good idea. Next is to land the bait in just the right depth. The bait should be thrown so that it would sink around 8-10 feet just barely above the tarpon’s head and line of sight. Remember, tarpons are easy to spook fish. Once a tarpon is spooked, anglers risk losing not just one tarpon but the whole school of them. Lastly, when a tarpon hooks on to the bait, anglers should most definitely hold on.

For novice fishermen or anglers new to tarpon fishing, Florida offers many tarpon fishing charters. With their help, visitors will be guided on the right equipment, the right fishing technique, and as well as the right bait to use for successful tarpon fishing in Florida.

Now THIS is a sword fish!  This sword was taken off the coast of Massachusetts with electric harpoon while giant tuna fishing.  These fish, and giant tuna alike, gorge themselves on sardines and krill and when satiated rise to the surface and layout while they digest their massive meals.  It is possible to approach these monsters while they are lying out and harpoon them on the surface, and then quickly kill them by electric shock to keep the quality of meet at its peak.  By using an electric shock and harpoon the fish dies quickly and eliminates the lactic acid buildup in the meat that would normally occur during the titanic struggle they put up if caught on just hook and line – a quick kill ensures the best quality tuna which is flown to Japan and sold in the world’s largest tuna markets- some fish bringing as much as $10,000!

It is not unusual to find giant tuna and sword fish together in one area- during these feeding opportunities whales, tuna, sharks and swords along with other predatory fish will be on station to get their share of the bounty!

The boats used in tuna fishing using the method of electric harpoon are unique as well.  The vessel has a bow pulpit 30 feet long and just wide enough for a man to make his way out to the end- here with the help of the mate high up in the crow’s nest, which extends some thirty feet above the water, he spots the fish laying out on the surface.  A rope is tied to the harpoon and then to a big float so that if the fish is not killed directly and runs it can take out the line and buoy until it tires and is picked up later.

Unfortunately this Captain suffered an unforeseen consequence linked to the sad day 911- he had several large tuna on board, one valued at over $10,000, not knowing that 911 had happened he made his way back to port to prepare the fish to be flown to the tuna markets in Japan, unfortunately there were no planes flying and the catch had to be sold on the local market at pennies on the dollar.