What is Sea Sickness, Why Does it Happen, and How to Prevent It?

What is Sea Sickness, Why Does it Happen, and How to Prevent It?

Sea sickness is a form of motion sickness and occurs after spending some time on a craft on water. This type of sickness is brought about by the rocking motion of the craft and is characterized by nausea and in extreme cases, vertigo.  Some people are vulnerable to the condition after only a minor stimulus while some are immune, and others immune through exposure.

Causes or Triggers for Sea Sickness

Sea sickness is not a virus and is not infectious. There are some factors that can bring on sea sickness relatively quickly. These include going below deck for extended periods of time, looking through binoculars for long periods, and staring at objects your brain will interpret as stable (reading, needlework, and the like).

All of these tips will help distract your brain from the rocking motion. Keeping occupied is important as it helps trick the brain into believing that you are uncomfortable from the constant rocking motion of the vessel. The fresh air also helps eliminate the sickness rather than staying indoors or in your cabin the whole time. While it may also be best not to cruise on an empty stomach, it should be remembered that fatty and spicy foods are not the best type of food to stock on before going on a cruise as this can trigger sea sickness.

What is a rigging needle? 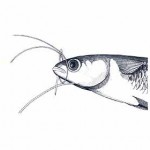 A rigging needle is simply a needle used for rigging bait to help aid on offshore fishing such as:  Trolling, Kite fishing, or live-bait fishing. One end has a hole where the thread is placed while the other end is sharp to be able to penetrate the bait/lure body.

How to Rig the Bait

Of course, there are many different ways to rig your bait, lure, etc. In general, you have to understand that something that you are about to rig to the line. What is it made of? Does it have a head and a body? What is the shape and type of its head? These are just some of the things you have to deal with.

Learn when to use a leader and what leader to use. Select the bait or lure. Cut several pieces of bow string (or other sturdy string), prepare strings as many (or more than) as your lures/baits. Get some pieces of Dacron or similar material. Glue all these stuff together and use a rigging needle to stitch them securely, making sure to arrange them in such a way that you will maximize your chances of landing as many fish as you can.

There are needles readily available, though you can also make your own.

Making Your Own Rigging Needle

What you need is a piece of wire coat hanger, file, hammer, and a drill with a 1/8” drill bit. It is quite simple to improvise a rigging needle. First, untwist the coat hanger and cut off a 12” piece (make it shorter or longer, depending on your bait; 12” is good for rigging eels). Use a file to sharpen one end. Use the hammer to flatten the opposite end. Drill a hole in the flattened portion and that’s it – you’ve just finished making your own needle.

Mainly used in deep sea trolling, outriggers are a pair of long poles fitted on both sides of a boat that holds fishing lines away from the boat. It is usually made of fiberglass and aluminum, and is tilted at an angle between 70 to 80 degrees.

When being used, outriggers are lowered to an angle nearly the same level as the water’s surface. At the edge of each outrigger is a pulley with a cord, attached to which is a quick release clip that holds the fishing line. Once a fish strikes, the line is released so that it can be landed with the use of the traditional rod and reel.

Generally, outriggers improve the chances of a fish striking because not only does it allow the angler to cover more ocean space, it also permits the use of multiple lines. Because outriggers allow the use of multiple rods and reels, anglers can troll as many fishing lines as it may allow, thus, simulating a school of bait fish. It also allows the leader out of the water, thus, preventing bubbles that may scare the fish away.

Outriggers also hold the fishing lines at a distance from both sides of the boat, spreading the lines far enough to prevent the risk of tangling. With more lines in the water, the angler can set them at different distances and depths that can create a variety of natural patterns to increase the chances of a strike.

The shallow, rocky reefs are also home to many fish species, however, trolling in these grounds are dangerous. With the use of outriggers, the fishing boat can stay in the safe deeper water while the lures are positioned to graze the shallow waters.

When trying to land that trophy marlin or, if you are ambitious enough, a thousand-pounder, you need all the information and help that you could find. When trying to catch the marlin of your dreams, try using these lures.

What is so great about the Mold Craft Wide Range is that it can be used in a wide range (thus its name) of conditions and speed. Thus, it is a favorite among anglers who want to land the big fish because it can be used in rough waters. This feature is accomplished by the center hole and squared-off nose.

The Pakula Lumo Sprocket was designed mostly as a straight runner and has a very tight swimming action. Lures by Pakula were first marketed in Hawaii for many years before these were sold in Australia, then, and the rest of the world.

One of the lures you really must have, the Mold Craft Super Chugger has a concave face that enables it to grab a gulp of air which it then lets out in a thick bubble stream. This lure also moves in a side-to-side wiggle so that it resembles the swimming movement of fish.

The Joe Yee Super Plunger is among the most popular and most widely used plungers, worldwide. A favorite by many anglers, these lures have caught their fair share of thousand-pound marlins.

Another favorite among anglers, the Marlin Magic Ruckus is among the most productive lures used for catching marlin.

Marlin is a prized game fish, mostly because it offers a big challenge to the angler as it fights long and hard.

The Atlantic Blue Marlin caught by JPeter Ganz was estimated to be 1,400 lb. It was caught off the waters of the islands of Azores, a Portuguese archipelago – near the Faial Island. This fish was not hauled in but was tagged, revived, and released back to the waters. For sure, this fish is among the largest caught.

Jacky Delbrel caught a 1,189 lb Atlantic blue marlin, again in the part of the Atlantic Ocean in Azores, near the island of Faial. This catch holds the IGFA 80-pound world record for Atlantic Blue Marlin.

It was in June 26, 1974 that the first thousand-pounder marlin was caught off the Oregon Inlet by Jack Harrington. Among the largest caught to date, this is worth mentioning especially since not too many thousand pounders have been caught. This marlin weighed 1,142 lb.

Tracy Melton caught an Atlantic marlin weighing 1,083 lbs in Madeira. It was caught with an 80-pound tackle.

Of course, there are also plenty of marlins caught that are not listed here but could be heavier than these. There are also talks of fish weighing as much as 2,000 lbs which were almost caught.

In fishing, it is extremely important for anglers to know what types of fish there are in a certain location, like Florida. While tuna is one of the most abundant species in Florida, there is also another species of fish that thrives in the Florida waters just as much. These other species are known as bill fish.

Bill fish is a common term applied to large predatory fish that are known for typically being large in size with long sword-like bills. Some of the most popular bill fish that have been identified include sailfish and marlin. In addition, these species can be found in the migratory, pelagic, and all oceans.

In Florida, however, there are specific species that are found in abundance in its waters. Some of the bill fish found in Florida includes the following:

While there are other fishes that are also found in Florida, a number of anglers travel to Florida for a chance to catch bill fish since these fishes are sometimes deemed a bit aggressive and hard to capture making it more challenging for them. To catch a billfish is one of those memorable moments in an angler’s record that beats capturing the often common snappers.

Come explore a iOutdoor Fishing Adventure on your next visit to Florida setting kite on your favorite offshore species!

Catch and Release! Save the day for other Marlin fisherman to come!

Catch and Release! Save the day for other Marlin fisherman to come!
There is more to fishing that anglers should be and must be aware of. For those who do not yet know, recreational fishing has made a great impact on the fish population and their habitat. This impact has caused a decline of several fish species and is a problem that needs to be addressed immediately. One of the best ways to answer this problem is through the observation of conservation techniques when fishing.

Ridin’ the Waves in Florida

Ridin’ the Waves in Florida

Florida boasts of having over 8,000 miles of coastline as well as 4,500 miles of inland waterways. With this much water for cruising, it is no wonder that boating is such a popular sport in the state. Many boaters often find themselves cruising over Florida waters and its waterways for the sheer beauty of it. Many types of boats have graced the waters of Florida ranging from mega-yachts to wooden skiffs. In Florida, owning a boat is as normal as owning a car.

The wonders of boating in Florida are further enhanced with its waterways, passages where boats can pass through for maximum boating experience. There are many waterways maintained by the Florida Inland Navigation District, the two most common and popular are the Intracoastal Waterway or ICW and the Okeechobee Waterway.

The ICW is also known as “the ditch” and is a natural but dredged channel. This channel extends 500 miles down the east coast of Florida to the tip of the Keys. This is a very popular boating route because it runs through rivers, creeks as well-dredged canals, giving boaters an extremely great variety in boating experience.

The Okeechobee Waterway, on the other hand, is composed of 135 miles of boating route. Extremely popular during the summer, this waterway runs along the St. Lucie Canal from Stuart, across the lake, then on to Sanibel Island via the Caloosahatchee River.

Best Places to Anchor Out

Just as cars park in a parking lot, boats do so as well but in ports. Boats aren’t just anchored anywhere. There are many great places to anchor in Orlando including across Ponce Inlet in front of sandbar of the Island; the anchorage in Boca Chica Harbor; and the bayside by Sand’s Cut. Brevard County also has a great place to anchor such as sand Island across Orlando Inlet.

It is recommended that before purchasing a boat or even before boating in Florida, especially for those new in the area, to get acquainted with the state’s boating rules and regulations for a safe and legal boating experience.